Dr. Pierce Answers FAQs about Cosmotheism and the CCC

Questions & Answers about Cosmotheism and the Cosmotheist Community Church

Q   With what single aim should men who are members of the Cosmotheist Community shape their institutions and shape their society?

A    Their single aim should be service of the Creator's Purpose. Every other thing which men may consider desirable in their society  -- justice, tranquility, security, happiness, wealth, liberty -- must be subordinated to this aim.

Q    What are the four social concerns of men which are in accord with this aim?

A    They are survival, right striving, order, and progress.

Q    What four functions of the Community follow from these concerns?

A    The Community defends the lives and the physical and moral health of its members; it guides their striving; it maintains order and structure; and it evaluates the value of the human stock in which it is based.

Q    In what ways does the Community exercise its defensive function?

A    In three ways: It safeguards the purity, healthfulness, and abundance of its physical environment and resources; it arms itself against those who would harm it; and protects its members from spiritual poisoning by falsehood and indiscipline.

Q    How does the Community guide its members' striving for knowledge?

A    It provides schools, libraries, and other educational facilities; it fashions its celebrations and its rites, its customs and its practices, so that they impart knowledge of identity, mission, and means; and it ensures that the efforts of its knowledge             seekers are purposeful and coordinated.

Q    In guiding its members striving for knowledge, what principle criterion does the Community use?

A    It guides its members toward knowledge which leads to understanding, complements consciousness, and abets service.

Q    Does the Community provide for separation of church and state, of religious and secular matters, in the guidance of its members?

Q    Why must the Community have order and structure? Why can it not be merely a collection of men and women of good will living together?

A    The Community does not exist for its own sake; it exists only in order to serve the Creator's Purpose, and it gains the strength to do so effectively only by coordinating all of its components.

Q    What criterion does the Community use in judging and ranking its members?

A    The Community judges and ranks its members according to their value in performance to its service to the Creator's Purpose. It recognizes each member's value in his physical and mental qualities, in his qualities of character, and in his attainments and service.

Q    What are the obligations of rank in the Community?

A    Each member has the obligation of guidance of those ranked beneath him and respect for those ranked above him.

Q    What are the four essential institutions of the Community, and their functions?

Q    How does the Community elevate the value of its stock?

A    It elevates its stock biologically by pruning and selecting, by combining and propagating in the family those qualities which best serve its purpose; and it elevates its stock morally and spiritually by refining and strengthening its means for awakening consciousness and building character in its members.

A   The Community remains unchanged in its purpose; it changes by conscious evolution of its means for serving its purpose.
Posted by Will Williams at 4:46 PM No comments:

These are to be studied, memorized and recited daily by Cosmotheist believers. These Affirmations are also to be recited aloud, in unison by Cosmotheists at the beginning of each gathering to reinforce our Purpose, which is the Creator's Purpose: 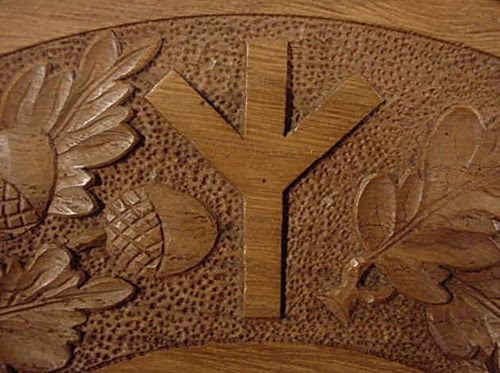