What Dr. Pierce did before he became radicalized racially

The direct induction of nuclear  spin transitions in a gallium arsenide single crystal by application of an external oscillatory electric field has been previously reported by some of the authors. This paper gives the results of a further investigation of the same phenomenon. Theoretical expressions are given for the equilibrium nuclear magnetization in a crystalline lattice under the combined influence of a static magnetic field, externally induced electric field gradients, and thermal spin-lattice interactions, for various relative orientations of the applied fields and the crystalline symmetry axes. The theoretical predictions were tested for the three nuclides , , and  by using pulsed nuclear magnetic resonance techniques to sample the equilibrium magnetization in a GaAs crystal at 77°K under the influence of a uniform, externally applied, radio-frequency, electric field. A description of the experimental apparatus is given. The dependence of the quadrupolar saturation on both the electric field amplitude and the crystal orientation was measured. The angular dependence of the saturation was found to be in reasonable agreement with the theory.
DOI: http://dx.doi.org/10.1103/PhysRev.129.1965

Racial loyalty is not rocket science, but it was nice having a bona fide rocket scientist and former Physics professor like Dr. Pierce around to explain the necessity for it to our people in simple yet profound language.

Posted by Will Williams at 8:13 AM No comments: 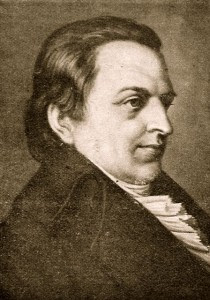 Johann Gottlieb Fichte, 1762–1814
Johann Gottlieb Fichte was one of those rare men who are both thinkers and heroes. His challenging Wissenschaftslehre (“doctrine of science”) remains one of the most ambitious attempts to encompass the world and its meaning in a speculative philosophical system. In his elaboration of Immanuel Kant’s philosophy of ethical idealism, Fichte achieved a compelling synthesis of the complementary values of freedom and duty. His conception of the world as the material projection of an ultimately all-embracing World-Ego exercised a seminal influence on the Romantic movement, that radical reassertion of Aryan racial values which in Fichte’s time was displacing the shallow rationalism of the Enlightenment.
Yet it is as the hero who called for a regeneration of the German spirit in an epoch-making series of addresses in a conquered Berlin swarming with hostile French troops that Fichte will live on in the memory of his countrymen. In his Addresses to the German Nation, the philosophus teutonicus, as the patriot-poet Ernst Moritz Arndt dubbed Fichte, revealed a vision of his people’s destiny which transcends national boundaries and still beckons to our own and future generations for fulfillment.
In December of 1807, it seemed that Napoleon and his all-conquering French armies had extinguished the last ember of German nationhood. In the year before, the Holy Roman Empire, the only tangible expression of the political unity of the German nation, feeble though it was, had been dissolved. More important, Fichte’s adopted homeland, Prussia, had reaped the fruits of over a decade’s timidity and indifference to the fate of its German neighbors. On October 14, 1806, at the twin battles of Jena and Auerstädt, Napoleon’s troops had all but annihilated the once matchless Prussian military machine. After fleeing to Königsberg in East Prussia, the well-meaning but irresolute Hohenzollern, King Frederick William III, had been forced to sign away half his country’s territory in the humiliating Treaty of Tilsit. Prussia was further obligated to pay a crippling indemnity, and Berlin was garrisoned by French troops.

A TRIUMPHANT NAPOLEON leads his troops through the Brandenburg Gate into Berlin on October 27, 1806, thirteen days after annihilating the Prussian Army at Jena and Auerstädt. This pro-French painting, by Charles Meynier, scarcely exaggerates the acclaim turncoat Berliners showered on the emperor. Prominent among the supporters of the French conquerors were the members of a race synonymous with treachery. As one historian put it, “Only the Jews were wholeheartedly and unhesitatingly pro-French, since they knew that one of the [French] revolutionary principles was their political and social emancipation . . .”
Fichte, even when he had tended to support the ideals of the French Revolution, pointedly excluded the Jews from consideration as German citizens. In anticipation of the National Socialist program, he advocated their deportation from Germany.

More ominous than the military collapse of Prussia and the other German states was the concomitant decline in German morale. The purely dynastic patriotism which the various German princes had attempted to foster among their subjects had proved no match for the intense nationalism which spurred the French invaders. Although, predictably, Germany’s Jews had accorded Napoleon his most enthusiastic welcome, many a Berlin burgher had also cheered the triumphant entry of the French imperial army. Prominent citizens sought audiences with the emperor, and sycophantic writers wrote panegyrics to his genius.
In pointed contrast to Napoleon’s effusive admirers, German patriots had fallen silent, content to denounce the foreign oppressors only to their most trusted friends in the privacy of their drawing rooms. There was ample justification for their timidity. French spies and German informers in their service were everywhere, and the French censors had more than blue pencils at their disposal.
Little more than a year before, Johannes Palm, a Nuremberg bookseller, had been arrested in connection with the writing and circulation of an anonymous anti-French pamphlet entitled Germany in Her Deepest Humiliation. He had been betrayed to the authorities by a German policeman. On August 26, 1806, Palm had been shot in the little Austrian town of Braunau-on-the-Inn (which, 83 years later, was to acquire even greater cause for the veneration of German patriots).
In these desperate circumstances, the philosopher Fichte resolved to speak out publicly in the cause of the German nation. He had accompanied the Prussian court and the remnants of Prussia’s battered army to Königsberg in 1806. There, his reputation for radicalism had frustrated him in his attempts to be appointed field preacher to the troops. Disappointed but still overflowing with determination to rekindle the German spirit, Fichte returned to Berlin in August 1807.
He took up residence with his family in the secluded Georgengarten, in a section of Berlin rarely frequented by the French soldiers. In the following months, he immersed himself in the writings of Machiavelli and the Swiss educator Pestalozzi, but above all in the Annalsof Tacitus, in which the heroic deeds of Hermann the Cheruscer against the Roman legions find their echo.
Drawing on these writers for inspiration, Fichte began to compose a series of lectures which incorporated the spirit of Machiavelli’s and Hermann’s fervent patriotism, and drew on Pestalozzi’s concrete proposals for educational reform. Professor Fichte (who was at that time a member of the faculty of the University of Erlangen) announced the addresses in a brief notice in the Vossischer Zeitung, one of the leading Berlin newspapers of the day. According to the announcement, the lecture series was to be the continuation of a popular course Fichte had delivered in Berlin three years before, which he had titled The Characteristics of the Present Age.
The Berliners who crowded the amphitheatre of the Academy of Sciences at noon on Sunday, December 13, 1807, were doubtless drawn by more than intellectual curiosity. Fichte had never shrunk from controversy, particularly in addressing the vital questions of the day, nor did he show any qualms in skewering his intellectual opponents on the sharp prongs of his scathing polemics. Would he be as forthright in dealing with the French?
There was also the problem of continuity with the previous lecture series. Attentive students of Fichte could recall that in his Characteristics addresses, the philosopher had represented himself as something other than the fervent patriot he had revealed himself to be in the intervening years. In fact, Fichte had proudly boasted of a cosmopolitanism in which “we ourselves and our descendants can remain indifferent forever to the affairs and fates of nations and states.” How were these sentiments to be reconciled with Fichte’s present stance?
Fichte was not unmindful of Palm’s fate. Later, during the course of his lectures, he wrote to his friend, the Prussian counselor Beyme: “I know full well what I am risking; I know that I can be shot just like Palm. But I have no fear, and would gladly die for the realization of my goal.”
Elsewhere Fichte wrote: “The only decisive factor is, can you hope that the good to be accomplished is greater than the danger to be risked? That good is inspiration, exaltation. My personal danger doesn’t matter; rather, it could be extremely advantageous. My family and my son would not lack the nation’s assistance; my son would reap the benefits of his father’s martyrdom. That would be the best outcome. I couldn’t make better use of my life.” 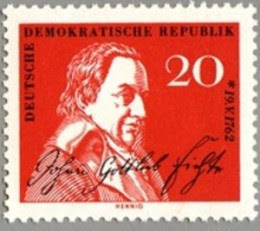 Posted by Will Williams at 9:42 AM No comments:

Knut Hamsun and the Cause of Europe

Posted by Will Williams at 1:30 PM No comments: