Learning to Get Along 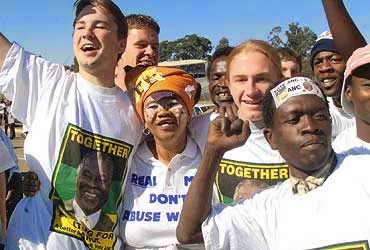 I SPOKE recently with an Alliance member just back from a year in Zaire (the former Belgian Congo). He is a government scientist who is obliged to spend most of his time in rather odd places: African jungles, Arabian deserts, polar icecaps, and the like. While in Zaire he took advantage of every opportunity to avail himself of White company, which is all too scarce there, and he became intimately familiar with the attitudes and ways of thinking of the permanent White residents of that country. The story he told me about his experiences chilled my blood — the more so because it had the solid ring of truth and agreed with reports from other places, such as Rhodesia (now “Zimbabwe”). (ILLUSTRATION: Whites joining Blacks in cheering for anti-White policies in South Africa)
What our member said, in essence, is that the Whites in Zaire have “gone native.” After two weeks of work in the bush, our member would return to Kinshasa hungry for the sight of a White face. But the Whites, in the part of Kinshasa which used to be Leopoldville, outnumbered now more than 100 to one by Blacks, have managed to blend into the landscape so thoroughly that one can only pick them out of the Black crowds by the color of their skin; nothing else distinguishes them. One of them will pass another White on the sidewalk — perhaps the only other White he has encountered all day — without even a glance. To accost one of them is almost an affront; the attitude is, “Why should I stop to talk with you? You are nothing special to me.”
Read more »
Posted by Vanessa Neubauer at 4:10 PM No comments:

The Consequences of Comfort

Commentary by Dr. Pierce in May 2000 National Alliance BULLETIN:

Until quite recently, unending struggle has been the condition of mankind. Through struggle we evolved. Struggle selected the strongest and most fit for survival and eliminated the unfit. A high birthrate together with a high death rate guaranteed progress.
Since the Neolithic Revolution the progress has been intermittent, however, with periods of ease, a lowering of the death rate, survival of the less fit, and decay alternating with periods of struggle, winnowing, and advancement. 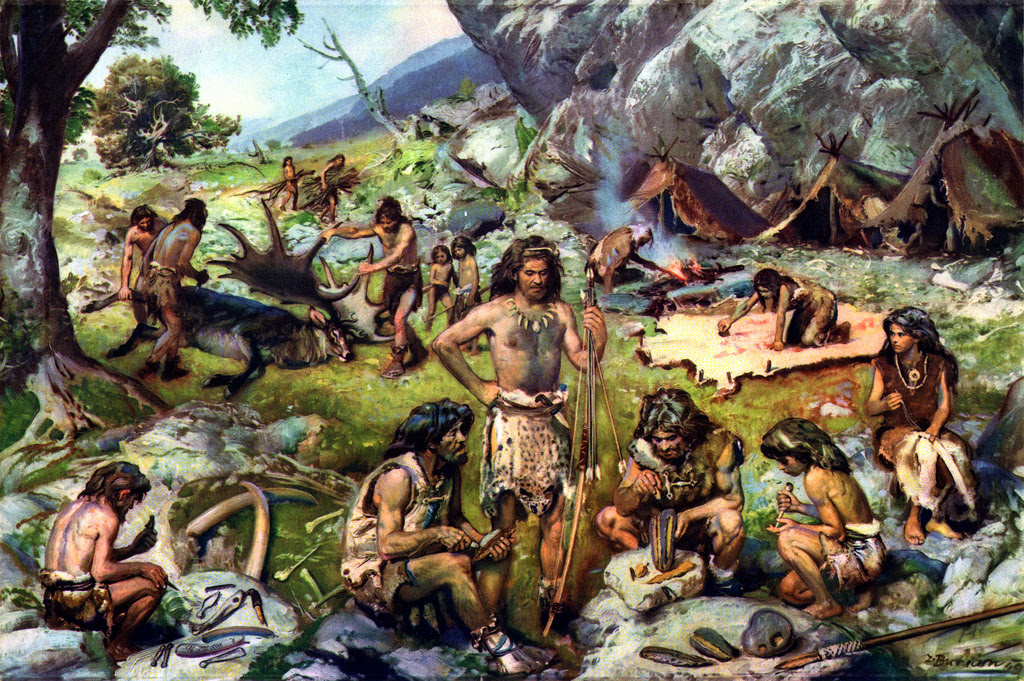 It is not just individuals who are more or less fit, fitness is a term which applies to nations as well. When the Romans encountered the Celts and the Germans more than 2,000 years ago, the Celts and the Germans were more fit individuals than the Romans, on the average – bigger, stronger, more daring – but the Romans were more fit collectively, because they were better organized and disciplined. For the Celts the consequences of indiscipline were disastrous; where they were not annihilated, they were pushed to the western fringe of Europe.
The German peoples eventually learned the value of organization and discipline  better than anyone else, and prevailed not only over the Romans but over the rest of the world as well. When they came to North America 500 years ago, they brought the habits of organization and discipline with them from Europe, and these habits served them well in conquering the new continent and building a civilization on it.
As America’s wealth grew, the struggle ceased. Not only were children who never would have survived on the frontier kept alive to breed more weaklings, but even those individuals with good genes lost their good habits and became less fit. The second half of the 20th century was a catastrophe in this regard. Wealthier than they had ever been before and therefore less obliged to struggle for their existence, White Americans quickly became less fit than ever before. Nor has loss of fitness only afflicted the wealthy, the growth of the welfare state has sheltered members of the working class from the consequences of failure and caused them to become less fit also.
************************
The consequences of excessive wealth and ease and the
feminization of child-raising has been a population of
soft, morally crippled White Americans.
************************
The loss of fitness has not been uniform. In some families tradition and strong leadership helped maintain good habits despite the wealth. More families, however, succumbed to the new fashion of permissive child-raising. Discipline became a bad word. Punishment was unheard of. The whole society became feminized, and the protection of children became a paramount concern; protection not only from physical dangers, but also from competition, from challenge, from disappointment, from need or even want, from the consequences of failure. Schools and other public institutions have collaborated with families in protecting and coddling children.
The consequences of excessive wealth and ease and the feminization of child-raising has been a population of soft, morally crippled White Americans. We have a generation of men who not only never had to kill another man in the struggle for survival, they grew up never having to pick up their dirty socks or actually having to work for a weekly allowance. As children they were never held accountable for anything. Everything they wanted has been given to them. They never have had to solve a problem or get themselves out of a tight spot. Many of them have no idea what hard work is. They have never been hungry, they never had to clean up their own messes, never had to suffer the real-life consequences of failure; mommy and daddy – or the welfare office – always have been there to bail them out. Concepts such as craftsmanship, performance, and responsibility are meaningless to them.
This moral debility has not affected all White Americans, of course. Those who still possess the capacity for self-discipline, for careful planning and hard work over an extended period, for enduring discomfort without complaint, for postponing gratification, and for self-criticism – a capacity expected in everyone a century ago but relatively rare today – have an enormous advantage over those who do not possess this capacity, or possess it to a smaller degree. And a similar statement can be made about organizations.
Understanding these things isn’t really helpful to the adult who has grown up without discipline or struggle, because the lack of capacity for self-discipline is almost impossible to remedy in an adult. In nearly all cases, it either is acquired early in life, or it is not acquired at all. Parents and prospective parents who understand these things, of course, are more likely to make correct decisions about raising children, if they still have the capacity to resist peer pressure and buck the trend toward even greater permissiveness.
The significance for us in all this is that if we are able to recruit selectively the better disciplined members of the White population, we can gain a significant advantage. This advantage may not be immediately apparent to a superficial observer under present conditions, but will become quite apparent when stress is applied. Which is to say, as long as the society remains tuned to the needs of the pampered and undisciplined population, the advantage of self-discipline may not stand out. When the support system breaks down, however, and the inept are left on their own – when the welfare checks stop coming, the electricity goes off, and the pampered suddenly become edible prey – those who have the habit of self-discipline will be far more likely to survive and prosper than those who don’t.
Likewise for organizations.
W.L.P.
Posted by Will Williams at 8:58 AM 1 comment:

Dear NATIONAL VANGUARD Reader.
We have a number of new books – and, for the first time, videos – listed in the accompanying catalog supplement. I believe they will be of interest to you.
I’m sorry there isn’t a new issue of NATIONAL VANGAURD with this letter. It’s been six months since the last issue, and it may be another three months before a new issue is published. The problem is that I’m trying to finish something I believe will be very important, and I haven’t had time to work on NATIONAL VANGUARD, which ordinarily takes most of my time.
I don’t like to announce things before they’ve been accomplished, but I feel I do owe all of our subscribers an explanation. Six years ago – back in 1983 – when I saw what a stir my first novel, The Turner Diaries, was causing and I realized I was reaching and influencing many people who never would read a serious article in NATIONAL VANGUARD, I decided to write a new novel. I already had an idea for one in my head, and I was sure I could do a better job with it than I had done with The Turner Diaries. So in November 1983 I wrote the first chapter of Hunter.

I know what we need to do. I believe I know how
to do it. But I can’t do it without more help.

We have some excellent people now; but there aren’t enough of them. The work is done by too few. We have to get more capable people involved, so that when I’m finishing a new book the publication of NATIONAL VANGUARD doesn’t come to a halt. But my problems with getting publications out are only one example. There are dozens of other programs we should be working on, programs that require many different kinds of people with many different skills.
I know what we need to do. I believe I know how to do it. But I can’t do it without more help. The details of what we will do depend on the specific people involved. I need to hear from those who are ready to help, so that we can discuss the details and make decisions.
As for everyone else, I appreciate your continued patience and support.
Sincerely
William L. Pierce, NATIONAL VANGUARD Editor
Posted by Will Williams at 12:43 PM No comments: