How Israel Gets a Free Lunch

From National Vanguard magazine, Issue No 104, March-April 1985:
How Israel Gets a Free Lunch

Thy gates shall be open continually...that men may bring unto thee the wealth of the Gentiles... --Isaiah 60:11

Jews are ingenious people, especially where money is concerned, and their financial ingenuity is nowhere more evident than in Israel. Consider: Whenever the Israeli government runs low on money (which is all the time), the minister of finance merely turns on the printing presses and prints as many more shekels as the government needs. No other government in the world is clever enough to finance itself in such an easy way.

Of course, there are a few little kinks in the Israeli method; for one thing, it causes an astronomical inflation, which has been bouncing around between a 400 per cent and 1,300 per cent annual rate for the past couple of years. In April the rate was 740 per cent.

The Israeli government has tried other methods of paying its bills: income taxes, for example. But Israel is a nation of tax evaders, and they are so clever at concealing income and assets that not even Jewish tax collectors have had much luck at making them pay what they owe. Nevertheless, the Israeli treasury is able to keep 400,000 government employees on the payroll; that's 30 per cent of the 1.34 million-strong Israeli workforce, a much higher proportion of government employees than in any other country on this side of the Iron Curtain.

Everyone agrees that the Israeli economy is an unmitigated disaster. And yet... the Israeli standard of living continues to rise; it climbed another 6 per cent in 1984. Despite the staggering inflation and trade deficit, Israelis are on a buying binge: home appliances, luxury automobiles, jewelry, foreign travel.

When inflation soars in Canada, Germany, the United States, or Poland -- when one of those countries cannot export enough of its goods to pay for what it must import -- then the people suffer; they must pull in their belts, reduce their consumption, and work harder in order to survive.

Why is it different for Israel? How are the Jews able to defy all the laws of economics with impunity?

The answer is no secret at all: Israelis are getting a free lunch, because they have persuaded the Gentile world to pick up the tab for them. Hymie Goldblatt in Tel Aviv is able to buy himself a new Mercedes and take his family on a vacation abroad, because Dick Smith's family in Kansas City is coughing up the tax money to pay for those things.

The Israelis are receiving $3.4 billion from the U.S. Treasury this year: $1.4 billion in military aid, $1.2 billion in "regular" economic aid, and a "special" $800 million economic aid supplement. That's all in outright gifts, not loans. In addition, American Jews are sending over another $1.5 billion in tax exempt personal donations, which effectively robs the U.S. Treasury of $700 billion in lost taxes. It all adds up to about a $5,000 annual bonus per Israeli family of four.  And that doesn't count a number of other handouts Israel manages to finagle from the U.S. government -- such as a recent grant to pay for the recent resettlement of Ethiopian Jews -- or the hundreds of millions of dollars in "guilt" money extorted from West Germany each year.

Next year the toll on the U.S. Treasury will be substantially higher. Already approved by Congress and the Reagan administration for 1986 are $1.8 billion in military aid around $1.9 billion in economic aid -- both as non-repayable grants.

If the pattern of previous years is followed, however, before the year is over the Israelis will discover various additional needs, costing hundreds of millions or even billions of dollars more. Then they will ask the U.S. government for the additional money, and the government will give it to them. That's essentially the way it was with the $1.5 billion in supplementary aid for 1986 and 1986 which Congress has just voted for them.

The Reagan administration had been dragging its feet on the request for the additional $1.5 billion, telling the Israelis that they should take steps to straighten out their economy instead of always asking for more American aid when they couldn't pay their bills. The Israelis had responded with a transparent pretense of attempting to produce economic reforms, but no one was fooled by the charade; no genuine reforms, no more money, Secretary of State Schultz told the Jews in a rare effort at firmness (which didn't fool anyone either).


************************
"Thou shalt also suck the milk of the Gentiles." (Isaiah 60:16)
************************
Then came Mr. Reagan's April announcement of his intention to lay a wreath in the military cemetery at Bitburg, Germany, followed by an orchestrated wailing about the "Holocaust" from Jewish groups. At the height of the wailing the White House caved in and approved the additional $1.5 billion in aid, with only a promise from Israeli Prime Minister Shimon Peres that he will tackle the problem of reforming his country's economy soon. In any event, the sort of "reforms" Mr. Peres has in mind are only cosmetic: an increase of 2 percent in Israel's value-added tax; a doubling of the tax on vacations abroad from $150 to $300; an increase in the sales tax on imported luxury items to 20 per cent.

The reason no knowledgeable observer believes that the Israelis will make any serious effort to get their finances out of the red is that they can do so only by reducing their standard of living. And why should Hymie Goldblatt deny himself the good things in life, so long as Dick Smith can be compelled to pay the bill?

The religious Jews -- the ones who take the "prophecies" and other pronouncements of the Old Testament seriously -- consider sponging off the rest of the world to be the God-given right of the Jews.1  And the secular Jews know that, so long as they can keep making the Gentile world feel guilty for the "Holocaust," they can keep gouging the suckers for more money.2

Of course, maintaining a tight grip on the Gentile world's news and entertainment media help the Jews keep the goyim in a giving mood; at least, it keeps the Gentile politicians ready to jump every time the Jews whistle. Even if Dick Smith isn't willing to help Hymie Goldblatt pay for a new Mercedes, the President, his congressman, and both his senators are more than willing to take it out of his taxes anyway; they are more afraid of incurring the wrath of the Jews than they are of losing Dick Smith's vote. 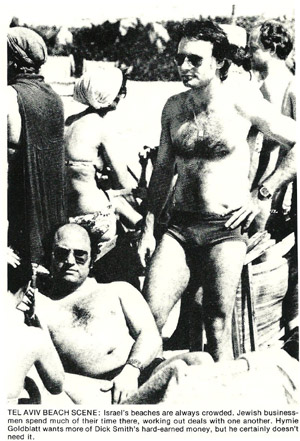 Just to keep the politicians on their toes, though, the Israelis have issued a new threat: If the Reagan administration forces the Peres administration to make any substantial reductions in the Israeli standard of living, the Israeli voters will replace Shimon Peres with Ariel Sharon as the new Prime Minister. The mere thought of having to deal with Sharon -- the ultra-arrogant, bloody-handed "Butcher of Beirut" -- gives Mr. Reagan and his aides nightmares. Sharon, on the other hand, relishes the prospect of being able to kick Gentile butts in Washington, and he criticizes Peres and the other members of the present Israeli government for not taking a tough enough line with the United States. "Unfortunately," he recently said of his colleagues, "they don't know how to face the goyim."

So long as the goyim remain such patsies, however -- plundered and betrayed by their own government, intimidated by the lie of the "Holocaust," with insufficient gumption to wrest control of their own news and entertainment industry away from its present masters, bemused by the philo-Semitic propaganda of the Judeo-Christian churches -- even the mild-mannered Peres should be able to guarantee that Israel will continue to get a free lunch, and that Dick Smith will have to pay for Hymie Goldblatt's Mercedes.
_________________________________

1 At the very core of Judaism is the belief that the Jews were chosen by their deity, Yahweh, to inherit the earth and all its wealth, without having to work for it. Religious Jews believe they have a covenant with Yahweh: if the Jews obey all of the commandments he has given them, then "the Lord  thy God shall...give thee great and goodly cities, which thou buildedst not, and houses full of all good things, which thou filledst not, and wells digged, which thou diggedst not, and vineyards and olive trees, which thou plantedst not...(Deuteronomy 6:10-11)


The Old Testament "prophets" are not at all bashful in reminding their fellow Jews that the divinely ordained function of the Gentiles (goyim) is to provide wealth for the Jews. Thus, "Thou shalt also suck the milk of the Gentiles." (Isaiah 60:16)


2 Although the actual number of Jews killed by the Germans during the Second World War was probably less than a million (and most of those lost their lives either by being summarily shot or by catching typhus in the concentration camps in the last months of the war, not by being "gassed"), if one accepts the claimed figure of 6,000,000 victims, then it is easy to calculate that Israel currently is collecting more than $500 in sympathy money per dead Jew per year from the Gentile world.

Posted by Will Williams at 5:06 PM