Sluyterman: Artist of Blood and Soil

“Who wants to live, so he must  fight, and who does not want to fight in this world of eternal struggle does not deserve to live.”  - Mein Kampf

From National Vanguard tabloid, Issue No. 63, 1978:
Sluyterman: Artist of Blood and Soil

Georg Sluyterman van Langeweyde, a great graphic artist, painter and folksong composer, died last January at the age of 74 [born: 4/13/1903]. His body was laid to rest in the German soil of his beloved Lueneburg Heath.

His graphic art combines a respect for the natural wonder of the forest, field and living earth and an admiration for the quiet, patient rural folk character.

In his clear, folk-based art, Sluyterman attacked the twentieth century tendency toward cosmopolitan formlessness and alienation.

In an Sluyterman graphic piece, man is one with nature, and one with his nature. He is not alienated from his surroundings, nor from his own racial soul.

Sluyterman's style breathes a sense of order and place. His art unifies a natural realism and a sober idealism; A careful depiction of what is with an affirmation of what is to be.

His idealism was harmonious with the striving for perfection inherent in nature itself.

Sluyterman's works convey a joyful affirmation of life. It is not the empty "happiness" of the rootless Pepsi generation, but the proud feeling of fulfillment which comes from meaningful accomplishment. His joy in living sprang from a humble awareness of man's mortal place in the natural order.

Sluyterman was an artistic personality in the fullest sense of the term. He was something of a vagabond, who ignored social norms and the conventions of attire. He didn't care about money or possessions.

As seriously as he took art, he was personally spontaneous, joyful and fun-loving. He enjoyed singing among friends in his full, baritone voice.* His warm personality, friendly smile and kind words came from the heart.

He was also an accomplished painter, and his popular country songs became accepted as genuine folk songs during his lifetime.

Sluyterman, whose ancestors came from Holland, was a great German and European patriot. He never sacrificed his honor for expediency or financial gain.

H was also no "sunshine patriot." Sluyterman continued to defend his national cultural and political heritage even after the catastrophe of 1945. He was an active member of the patriotic German Cultural Foundation of the European Spirit (Deutsches Kulturwerk Europaeischen Geistes), founded after the Second World War.
---

* It's assumed that the singer with the "full baritone voice" in this video is Georg Sluyterman:

The photo above is of George Sluyterman, available in a Google Image search. The rarer picture below is not found in an Internet search, but accompanies the article about Mr. Sluyterman in Mortimer Davidson's Kunst in Deutschland 1933-1945, Malerei II, published by Grabert Verlag Tubingen, 1992 (page 425) It is assumed to be a self-portrait since no other artist is credited. 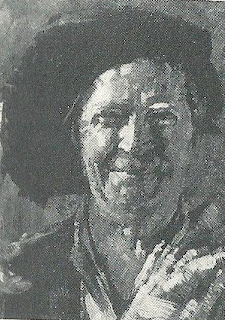 Posted by Will Williams at 9:24 AM