ATTACK! CERTAINLY does not want to establish a reputation as a pander for the skin-flick trade, but we are going out on a limb just once and recommending that all our readers see the movie Portnoy’s Complaint.

If the viewer can stomach the peculiarly Jewish fixation on genitalia and human excretory functions which pervades the film, there is a reward for him: namely, a fleeting glimpse at the traditional Jewish attitude toward Gentiles — or the goyim, as Portnoy and his family would say.

The nationally syndicated film reviewer, Rex Reed, reacted to Portnoy’s Complaint with the indiscreet statement: “This film will make many people think Hitler was right about the Jews.”

For example, there are disparaging remarks which Portnoy’s parents repeatedly utter about Gentiles: “goyische crooks” and the like. The viewer, of course, is supposed to believe that is only because they are old-fashioned, religious Jews, who have been brought up on the Talmud and can’t help themselves. Young Portnoy, in contrast, is a “liberated” Jew, who has no truck with the anti-Gentilism of his parents — almost.

The careful observer will see the true attitude of the “liberated” Jew more subtly — and, presumably, unconsciously — expressed by the Jews who created this sickening film and the book on which it is based, in their diverse portrayals of two of its characters: the empty-headed, degraded Gentile girl, or “shiksa,” Mary Jane, and the upright, self-confident Jewish girl, Naomi.

This word “shiksa,” used several times during the film, tells a story of its own. It is one of those Yiddish words, like “schlemiel” or “schmuck,” formerly used only by Jews out of earshot of the nearest Gentile, which today are openly flaunted in mixed company — and have even become part of the vocabulary of “avant-garde” Gentiles.

Some Yiddish words stem from Hebrew; most, like “schmuck,” have German roots. A particularly interesting feature of Yiddish words is that a great many of them have double meanings. “Schmuck,” for example, means “ornament” or “decoration” to a German; to a Jew it means “penis.”

A Piece of Meat

“Shiksa” has a Hebrew root which means “abomination,” “something unclean” — specifically, a piece of “unclean” (non-kosher) meat, like a pork chop or a slice of ham.

The use of the same word to designate a Gentile girl and a piece of “unclean” meat may seem to many only a harmless, private Jewish joke. It’s no joke, though.

Consider the more commonly used Yiddish word, goy (plural: goyim), meaning “Gentile.” It comes directly from the Hebrew, where it has two meanings: (non-Jewish) “people” or (non-Jewish) “nation” — and “cattle.”

It is interesting to browse through the Old Testament, substituting “goyim” for “nation” wherever that word appears. For instance, “The goyim who refuse to serve you (Israel) shall perish; yea, those goyim shall be utterly wasted” (Isaiah 60:12). It brings home a little more clearly the burning hatred, the bottomless contempt of Jew for Gentile — a hatred and contempt which stretch from the time of Isaiah to the present.

Usually Jews have kept these feelings carefully concealed, although one would think the Old Testament sufficiently explicit to give the game away. The Talmud is much more explicit — so much so that it is scrupulously guarded from prying Gentile eyes. Thick-witted, good-natured brutes though they be, even Gentiles might take offense at the blatant expression of hatred in the Talmud.

It is all the more curious, then, that in the past few years the Jewish Establishment has so recklessly let its guard down. Why a picture like Portnoy’s Complaint when there are so many other sick (and safe) topics they could have used for a porno-film? 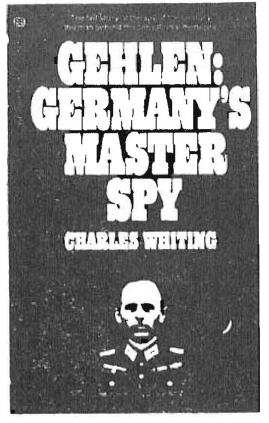 A documentary paperback reveals Jewish hatred and vengefulness against Germans expressed through Talmudic ritual murder. None of the hundreds of American GIs who witnessed the scene in May 1945 will ever forget the little park in the Berlin suburb of Lichterfelde where the corpses of 30 German children between the ages of three and nine were found hanging upside down from trees by cords strung through their heel tendons. Their throats had been slashed and Hebrew letters daubed on their naked bodies with blood. News of the horrible atrocity, which had been committed by Soviet Jewish troops, was suppressed and Army news photographers’ film confiscated, on orders from Eisenhower’s HQ.

And why have they let the book Gehlen: Germany’s Master Spy go on sale as a paperback at newsstands all over America, when that book reveals (on page 133) that the Jewess, Hilde Benjamin, chief justice of the postwar Soviet regime in East Germany, delivered all her thousands of death sentences according to the Jewish tradition for ritual murder of a Gentile, with Talmud, candle, and all?

Why the increasing tendency in the mass media to rub our noses in the private little world of Jewish humor, Jewish perversion, and Jewish folkways — almost as if the media existed for their benefit alone, and we just didn’t count?

Has their contempt made them careless?

Not really. During the next few months a million or so goyische “cattle” will pay their $3 apiece to see Portnoy’s Complaint, and 99 percent of them will laugh at all the places they’re supposed to laugh, think only what they’re supposed to think, and walk out when it’s all over no more aware of what’s going on in the world — and no more caring — than when they walked in.

But Portnoy and his tribe had better watch out for that last one percent.

From Attack! No. 14, 1972 transcribed by Anthony Collins and edited by Vanessa Neubauer, from the book The Best of Attack! and National Vanguard, edited by Kevin Alfred Strom

Posted by Vanessa Neubauer at 6:14 PM