Solzhenitsyn and the Liberals

WHEN ALEXANDER SOLZHENITSYN, the Russian dissident writer who was exiled by the Soviet government in February, recently shouted at a group of Western newsmen, “You are worse than the KGB (Soviet secret police, equivalent to our FBI),” they were understandably hurt. After all, had not the newsmen of the democratic West made a great folk-hero of Solzhenitsyn, praising him to the skies at every opportunity? Had they not publicized his books for years, leading to their widespread sales outside the Soviet Union — and to a Nobel Prize for Literature for him in 1970?

Alas, the neo-liberal media masters of the West were finding to their sorrow that they had misjudged their man as badly as the communist masters of the Kremlin had earlier.

Solzhenitsyn’s world renown as a writer began in 1962, when Nikita Khrushchev sponsored the Soviet publication of One Day in the Life of Ivan Denisovich, an autobiographical novel of Solzhenitsyn’s experiences as a prisoner in Stalin’s death camps. Khrushchev was promoting the de-Stalinization of the Soviet Union, and Solzhenitsyn’s criticism of Stalinism fitted the party line perfectly at that time.

Later, however, the Soviet leaders began to realize that Solzhenitsyn was opposed to a great deal more than just Stalin’s particular brand of communism. They tried to shut him up, but it was too late; they had already given him a reputation and an international audience, and Solzhenitsyn continued cranking out new books which blasted away at the very foundations of the Marxist-Leninist world view.

The shallow-minded liberals of the West seized on these books as props for their libertarian-democratic philosophy, as opposed to Kremlin authoritarianism. They mistakenly assumed that any Soviet dissident is automatically a neo-liberal — as, indeed, a whole platoon of dissident Jewish-intellectual contemporaries of Solzhenitsyn’s are. 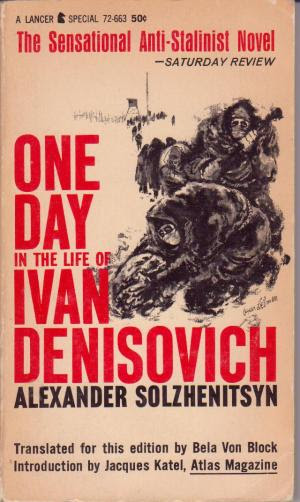 But Solzhenitsyn is a genuine Russian, not a Jew. His world view comes from deep in his Russian soul, and it is as hostile to neo-liberalism as it is to Stalinism.

That fact was made manifest last month when Solzhenitsyn released a long letter he had written to the Kremlin bosses. He urged them, for the good of Russia, to turn away from the “dark, un-Russian whirlwind of Marxism,” as well as from the decadence of Western liberalism. (Marx, as also nearly all the other founders of communism, was both un-Russian and un-Western; he was a Jew.)

A Warning to Brezhnev

He condemned the murderous regime which had sent uncounted millions of his countrymen to their deaths, and he called for rooting out and punishing Stalin’s fellow murderers who still hold positions in the Kremlin hierarchy. But more than that he warned Brezhnev & Co. not to let Russia fall victim to the democratic disease now ravaging the West.

How disillusioned Solzhenitsyn’s admirers in the media must have been to read of his disgust at the “democracy run riot” in America — and, in particular, his citing of America’s inability to cope with such termites in her timbers as Daniel Ellsberg and Ramsey Clark, both media idols! He also cited America’s political parties and labor unions, her hypocritical neo-liberal intellectuals and corrupt officials, all engaged in a squalid “conflict of interests, just interests, nothing higher.”

But his denunciation of Western liberalism contained analysis as well as invective. He looked at the core of the malignancy and saw that it had no ethical foundation. It could neither provide a basis for sustained resistance to tyranny nor could it long support any civilization.

It had no coherent metaphysical structure; it was a morbid and unnatural condition of society, a pollution in the stream of history. It was as irrational and inconsistent as it was weak.

Maggots in an Apple

Solzhenitsyn had only scorn for the Western liberal’s belief in indefinite “progress” through industrialization: in a “growth” economy year after year, without limit. To him it was plain “that a dozen maggots can’t go on and on gnawing the same apple forever; that if the earth is a finite object, then its expanses and resources are finite also, and the endless, infinite progress dinned into our heads by the dreamers of the Enlightenment cannot be accomplished on it. . . . Economic growth is not only unnecessary but ruinous.”

He dreamed instead of a stable economy, of a limited population living close to the land and in harmony with Nature.

Horror of horrors, he even suggested striving for racially homogeneous communities by dividing the Soviet Union into several separate ethnic regions. That way White Russians and Oriental Kalmucks, for example, could preserve their own racial identities and pursue their own destinies.

To Become an Unperson

The first reaction of media liberals to Solzhenitsyn’s letter and his comparison of them to the KGB was embarrassment and a few nervous giggles. As it dawned on them that he really meant what he said, they moved to undermine the public prestige their former praise had given him. Newsweek (owned by the Washington Post) called him a “holy fool” and referred to his views as “idiosyncratic in the extreme.”

Their next step will be to relegate him to the status of an “unperson” and cease to mention his name at all.

If ordinary Americans can find anything at all to criticize in Solzhenitsyn’s views, it is his insistent reference to Western decadence, Western indiscipline, Western liberalism. Doesn’t he realize that liberalism (or, more correctly, the neo-liberalism which passes for traditional liberalism today) is as un-Western as Marxism is un-Russian, and for the same reason? 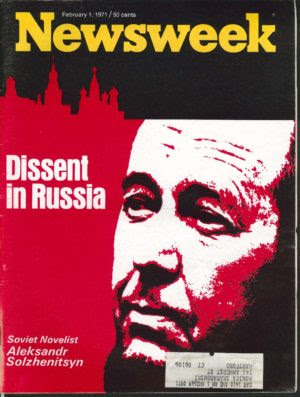 If neo-liberalism were a true expression of the Western soul, then there would indeed be no hope for the future. We could look forward only to increasing moral decadence and social chaos, accompanied by a more-or-less gradual racial mongrelization; until, having altogether lost the capacity for sustaining any semblance of civilization or even maintaining a national defense, we became a serf-nation under the heel of any better-disciplined race who found it worth their trouble to enslave us.

But the national madness which holds us in its grip today is not endemic. It is unnatural, alien.

The slack-jawed philosophy of Benjamin Spock (“If it feels good, do it”), which has been impressed upon a whole generation of Americans through ultra-permissive child-raising practices, is not Western in origin.

The hyper-individualism which urges each person to find his own “sexual preference” (i.e., homosexual, bisexual, or “straight”) without regard to social consequences, has no roots in Western tradition.

The ruling insanity of the racial-equality theorists, who steadfastly refuse to accept the plain evidence of everyday experience when it contradicts their babbling about universal human equality, flies directly in the face of a deep-grained Western objectivity.

We did not inherit from the American pioneers the feminine squeamishness which lies behind our present inability to make the hard decisions and implement the stern policies needed to bring a final solution to a myriad of economic, social, and racial problems. Nor did that soft-mindedness, that weakness of will, striving only to postpone difficult decisions until they must become stern indeed, come to us from our European forebears who built the mighty edifice of Western civilization.

Because the disease of the West is a parasitic growth which has fastened itself onto the West’s soul, and not an outgrowth of that soul itself, we can hope to cut it out and thereby cure ourselves, albeit with a great deal of pain and loss of blood — and greater the longer the surgery is delayed. We would feel an even greater admiration and sympathy for Solzhenitsyn if he had said that, instead of dismissing the West as being already in a terminal state.

For that matter, he did recognize the blood relationship between neo-liberalism and communism in pointing out that it was a “liberal” movement in Russia, culminating in an eight-month period of “people’s democracy” in 1917, which eroded the foundations of the old order and so prepared the ground for the ascendancy of Marxism.

The course of the disease in the West has been different than in Russia. Here liberalism has quite thoroughly obliterated all the old values, but then, instead of leading us promptly into communism, has lingered on and on.

Unfortunately, the West has probably suffered greater spiritual damage from its long cohabitation with communism’s pimping little sister than Russia has suffered from a half-century of communism itself.

Indeed, Solzhenitsyn may have had just that deep meaning in mind when he shouted to the Western newsmen, “You are worse than the KGB!”