New Phenomenon Signals Rising Vote of "No Confidence" in System
There's an interesting psycho-social syndrome which has been quietly growing in America for the past two decades or so and has finally caught the attention of the controlled mass media: it is "survivalism."
Actually, that term covers a fairly wide range of phenomena.  The end of the survivalist spectrum the media have seized on recently is the grab-your-guns-and-head-for-the-hills end, because it lends itself most easily to a sensationalistic treatment.
At the other end are the timid folks who wouldn't dream of grabbing a gun, under any circumstances, and are far too citified to survive in the hills anyway, but who have quietly laid in a two-year supply of dehydrated foods. And there are all sorts of marginal offshoots:  for example, the retired couple who have made up their minds to sell the family home and move into a condominium, but who are only looking at ads for places which offer a high wall all around with electronically controlled gates, closed-circuit TV surveillance, and an armed security patrol on the grounds.
Of course, many people are attracted by real estate advertisements which stress security features, simply because they are aware of the rising crime statistics and want to feel secure in their own homes. They should no more be classified as survivalists than the fellow who keeps a sock full of Krugerrands hidden under his mattress – just in case.
For many, however, it goes deeper than that. Among the real estate customers who wouldn't consider buying a place which can be broken into with anything less than an M-60 tank are a few – a growing few – who feel a sick fear in the pits of their stomachs, the consequence not only of the soaring burglary statistics but also of the conviction that burglaries will keep on increasing, year after year, and that the police and the government will never again be able to offer any real protection to law-abiding citizens.  These few have concluded that, if they want to be safe in their homes, they're going to have to find virtually impregnable places to live, where they don't have to count on the government to keep burglars or rioters out. They are survivalists.
And among those who are laying in a long-term supply of dehydrated foods or converting half of each paycheck into gold coins there are also a growing few who are convinced that some day – they don't know exactly when, but some day in the next few years – they’re actually going to have to eat their dehydrated larder, because the supermarket shelves will have been stripped bare by hungry mobs, or they're going to need those gold coins in order to purchase the necessities of life, because Federal Reserve notes will be worthless.  They, too, are survivalists, of a sort.
There is one element which is common to the entire survivalist spectrum. It is a loss of faith in the System.
There has always been a certain amount of paranoia in the population, a certain number of people who deeply distrust the government and are sure something awful is bound to happen soon. The survivalist syndrome is much more than that, however. It affects more than right-wing gun nuts and elderly cranks with funny theories about money.  More and more perfectly normal people are simply looking very carefully at what is going on around them in America, and the sight is raising the hairs on the backs of their necks.

[Updated graphic] SURVIVALIST publications have been sprouting up like mushrooms after a summer rain. They range from slick, multicolor magazines for the newsstands to mimeographed newsletters with tips on edible roots, knife fighting, and homemade explosives. Readership – just as involvement in survivalism – is almost completely White, as a glance at the advertisements reveals, although Jews are moving into the sale of survival equipment and supplies.
They are schoolteachers and truck drivers and physicians and government clerks who have to work in America's cities among hostile, undisciplined Blacks, Levantines, Orientals, and Chicanos who are noticeably more numerous and noticeably more aggressive with each passing year, and they have said to themselves in a tone of rising panic, "My God, things can't go on this way!"
Having also observed that their government not only is not doing anything to stem the non-White flood but is leaving no stone unturned in its efforts to increase it, they don't waste their time writing letters to Congress.  Instead they begin thinking seriously about the relative merits of 5.56mm semiautomatic rifles with 30-round magazines, and 12-gauge pump-action shotguns loaded with No. 4 buckshot for fending off dusky hordes of frizzy-headed marauders.
Even liberals are beginning to take note of what the policies they have mindlessly advocated for the past 50 years have done to the world, and it scares the hell out of them.  Although they would never admit it to the other liberals they rub elbows and snort coke with at fashionable cocktail parties in Washington and New York, a few of them have also been quietly laying plans for a quick getaway when the day of reckoning comes.
Some readers with long memories may recall the fallout-shelter debate of the 1950's:  the "cold war" era when the government was at least dabbling in civil defense preparations, and many citizens were taking the idea of a nuclear attack on the United States by the Soviet Union quite seriously.  Cellars were stocked, Geiger counters were purchased, and much hand wringing was wasted on the ethical problem of the grasshopper and the ant.  Many of the "ants" – those who had prepared and stocked fallout shelters for their families – indicated that they would not hesitate to shoot any improvident, grasshopper-type neighbors who came pounding on the doors of their shelters after an attack.  Predictably, the media pundits were horrified and were very much on the side of the grasshoppers.

Some of the "ants" of the 1950's may properly be considered survivalists, but the majority of them were by no means alienated from the System. Many, in fact, were political conservatives, who liked things the way they were and thought of the System as a bulwark against communism and chaos. That was before JFK, LBJ, and the "civil rights" revolution of the 1960's, of course.
Today the all-out survivalist recognizes the government as the primary threat to his survival.  Far from wanting to keep things as they are, he finds conditions increasingly intolerable.  He is intelligent enough, or has good enough instincts, to realize that the policies the U.S. government has been following for the last few decades are inevitably leading to a total disaster.  He finds himself in a surrealistic, almost nightmare situation, in which he sees the people all around him blithely marching to their own destruction.
He does not know whether or not he is the only sane person in a world gone mad, but he does know that he does not intend to be destroyed along with everyone else, if he can help it. He has become totally alienated from the suicide-bent society in which he lives, and he is looking desperately for a way to get off the boat and far enough away from it so that he won't be sucked under when it goes down.
So, one can recognize three distinguishing traits in the survivalist: a sturdy sense of personal identity, which allows him to think independently and choose a course separate from that of the herd; a strong will to survive; and alienation from the present society and the System which rules it.  In addition, many survivalists have a fourth trait: an intuitive spiritual rejection of modern society which goes beyond mere political alienation.
This last trait – which many who are not survivalists also share - manifests itself in various ways. In some it is expressed as a desire to "get back to Nature"; in others it takes the more negative form of hostility to modern technology.  It is based on an intuition that the modern, urban-industrial lifestyle is unnatural and unhealthy, as well as personally unsatisfying and even repugnant.
Thus, one finds among survivalists many with unusual dietary notions and a prejudice in favor of "natural" foods; a strong interest in useful, pioneer-type arts and crafts, such as the preservation of meat and other foods without refrigeration, or home weaving or home cobbling; an itch to build windmills, waterwheels, and other gadgets typical of an earlier and less interdependent era; a tendency to distrust the medical profession, with all its modern paraphernalia, and to rely instead on "home remedies," including home childbirth .
Part of this is rationally related to the survivalist's interest in enhancing his own survivability by making himself more self-sufficient, but part of it is often a confused rationalization of a deep-seated – even subconscious – feeling having more to do with instinctive behavior patterns than with modern technology.  At root it is not the jet engine, the transistor, or penicillin which the "back to Nature" streak in the survivalist is rebelling against; rather it is the laws, regulations, customs, and constraints of a modern mass-society.
Tools – even very complex tools – are "unnatural" to Western man, who has been a tool maker and a tool innovator for a much longer time than he has been man. What is unnatural is the way in which his creative instinct, his fighting instinct, his adventurous instinct, his mating instinct, and his territorial instinct – to use loose and imprecise terminology – have been frustrated or subverted by a society in which the population density is vastly greater, the rules of behavior vastly different, and the channels of expression vastly more tortuous than those to which his genes have become accustomed over the several thousand generations prior to the last dozen or so. 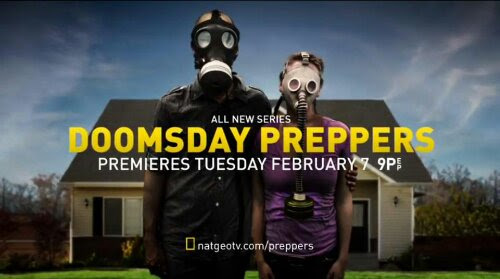